A while back I took a trip to Mexico. I spent seven glorious days at the exclusive El Dorado Royale. It was seven days in a manmade paradise. Although I refer to those who I encountered there as “monarchs” I use the term figuratively. I write this from an outside observer’s point of view, admittedly if asked, many would not have perceived me to be different from my excessive self proclaimed monarch counterparts.

In this secluded island paradise, the masses flocked to frolic in the sun, to eat, drink and be pampered to their heart’s content. My first few days, this constant pampering and posturing of the staff impressed me. It wasn’t until my very astute mate voiced his discomfort at having other individuals wait on him hand and foot that I became aware. With this awareness, I began to question my purpose and my very existence. The service was impressive, but I started to notice that most vacationers acted like they deserved to be treated like royalty. They wielded control over the staff with “tips”. One day I observed one of the patrons slip a member of the wait staff a crumbled note in an effort to entice him to contravene resort rules. After the staff member left, the patron looked at his companions and stated with a cocky grin, “tonight we are kings and queens!” I saw this theme repeated throughout the week.

Another time, my husband and I met a couple at the pool. Being with child, I dutifully sipped my smoothie as they downed their presumably delicious (and unlimited) alcoholic beverages. As the man drank more, the more he talked about himself, and his possessions. He talked about his expensive watch, his vehicles, his big house back in the United States and his various travel adventures. Just as I was about to lose interest he remembered that I am originally from Kenya. My ears perked up,

because this is a topic that I could talk about for days. At this time, his wife swam over and decided to chime in on our conversation. “Last year, we adopted from Africa.” At that moment my heart swelled, all was not lost. There was more to life than just accumulating riches, bragging rights and languishing in opulence in exotic locations. “Really?” I asked in disbelief (we had been talking for several hours and this was the first time she mentioned this). “Yes, we adopted a baby elephant.” My jaw almost hit the floor. After that statement, my mind shut off to most of what she said afterwards. I just know that she sends money every month to some part of Africa to give this one elephant a good life.

Throughout my stay, the phrase “is this all there is?” repeatedly echoed in the deep recess of my mind. Most of these people worked really hard to save for a lavish vacation. They just wanted the fact that they spent an inordinate amount of money to be recognized, and the resort catered to this mindset. Not every vacationer was like this, but the ones who were, overshadowed less boisterous. I watched the other vacationers as they enjoyed the luxurious amenities, half of them never acknowledging or even bothering to look the staff in the face. I was really perplexed because I did not want to the staff or anyone that I encountered to assume that I would also treat them in a gruff, entitled and callous manner. I felt guilty and ashamed to be associated with the excess. After voicing my complaint to my husband, we had a long talk. I finally realized that in life, I can’t control other people’s behavior, nor could I control how the staff perceived me. My only duty was to be kind and treat each of them with respect and dignity. Once I accepted this, I began to enjoy my vacation a lot more. 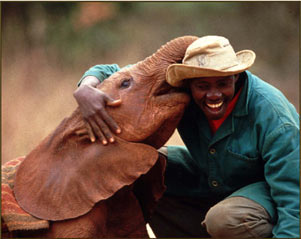 If you would like to adopt an elephant from Africa, simply click on this link to get to the David Sheldrick Wildlife Trust.