I recently attended a Royal Mermaid Princess Tea Party… It was the most splendid royal tea party that I have ever attended. The attendees got manicures and makeup! The Mermaid Palace even supplied the guests with extravagant Royal wardrobe with finest assorted royal attire. Each guest could choose what they wanted to wear. They also had the option to change their wardrobe multiple times.

The tea party was so Royal, even Princess Ariel made an appearance. She had so much fun that she stayed for the entire party! She sang, she danced, and she entertained the guests with her stories. The guests feasted on strawberries, blackberries, veggies, meat, cheese and crackers and nuggets made of chicken (prepared from the Royal establishment of Chick-fil-A).

There was cake, in fact there were two cakes! One of Mermaid rainbow color decor and the other, a sparkly Unicorn  baked by the finest Royal baker. The guests sipped Mermaid tea from genuine porcelain tea cups. At the end of the ball, Princess Ariel chose two party guests to join her in her Royal Mermaid Princesshood by bestowing upon them two shiny diamond tiaras and crowning them Princesses!

That is how I envisioned Big Z and Little Z’s birthday party. Initially, the girls wanted a Cinderella Royal Ball/Tea party. They wanted to dress up and have all their friends attend. Then Big Z asked for a Mermaid Tea party. She wanted her and her friends to get manicures and make-up. Little Z wanted a Unicorn and rainbow party. She wanted to wear beautiful princess dresses. Both girls wanted a piñata full of candy. My dream of a Royal ball was falling apart real fast.  Desperate to have a successful birthday party for both girls, we scrambled to meet their demands. I called various local salons to see if they could do mini manicures and predicates for  a group of children. The prices they quoted per child was more than we were willing to pay. I called a local tea place to see if they were willing to host us for the tea party, they were reluctant due to space. I gave them all my details and nervously waited for a callback…it never came. Then I discovered a place called the Princess Party Palace in Bentonville. I called the owner on short notice and explained to her my predicament and my vision. “No problem, I got you covered,” she said. The rest was history. We scrapped Cinderella and replaced her with Ariel and voila, a Royal Mermaid Princess Tea Party was born! The morning of the party had its fair share of mishaps (the bakery had messed up both cakes). However, we were not deterred, the party had to go on! 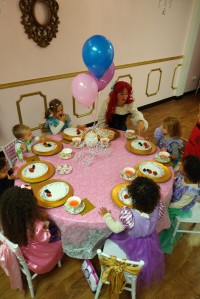 I showed up to the Princess Party Palace and it was already set up. The venue provided a party assistant who helped set up the cakes, finger foods and party favors. She informed me to put up my feet and relax and indeed she had everything under control. She coordinated the party from start to end. The girls and their friends had a wonderful time and more importantly, this mama enjoyed being in the moment and had a successful stress free birthday party for my girls!

…I recently attended a Royal Mermaid Tea party, and it was just like I envisioned it would be…